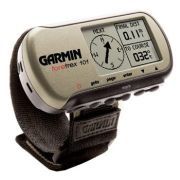 I was able to test the Garmin Foretrex 101, a nifty lightweight wrist-mounted GPS (Global Positioning System) unit, under actual conditions for the first time during the recent Makiling climb. Although it doesn’t have loadable maps, it does have most of the features of bigger GPS units: track recording, waypoint recording, navigating the tracks and waypoints, and trip log. It also has user replaceable AAA batteries. A similar model, the Foretrex 201 has a built-in rechargeable battery which doesn’t really make sense for an outdoors device.

My main complaint is that it loses track of GPS signals when there’s thick forest cover above. But then, that’s typical of most GPS units. Oliver, who was carrying a higher-end Garmin GPS unit during the climb, encountered the same problem. In any case, this didn’t hamper the usefulness of the device all that much.

One Reply to “Garmin Foretrex 101”