The Achilles’ heel of smartphones is their battery life. Sure they provide voice calls, SMS, video calls, chat, email, navigation, games, etc. But when your run out of power, it’s no more than a very expensive paperweight. You don’t even get to call or SMS. I’ve sometimes gotten into such situations. Sometimes disaster (in a manner of speaking) is averted by meeting a preset meeting place (that itself is a good practice but that’s another story). But it is definitely a bummer when your phone runs out of juice.

To lengthen their smartphone usage, people resort to battery cases (expensive), carry extra batteries (somewhat expensive and limited to a specific phone model), power banks (less expensive but can get bulky), or chargers (needs somewhere to plug in). Also, more and more public spaces such as malls and cafes are offering charging stations. But then there also the possibility of a prolonged power outage as in a disaster scenario like the recent Yolanda supertyphoon. Of course, cellular signal was also affected but at least the telcos were able to restore some within 3-5 days.

Enter the Nokia 105 with a whooping 35 days of standby. That should be good till the telcos restore service and the US Marines and the Red Cross arrive (never mind the government). It’s probably the perfect smartphone backup. It’s small and light albeit a little chunky due to its relatively big battery. But still, it’s quite handy and fits in some small pocket in your cargos or [bug out] bag.

It’s got the basic Nokia phone functionality we’ve grown up with as well as an FM radio (requires headphones, not included) and flashlight (which unfortunately doesn’t work without a SIM). The keyboard is splash and dust proof but the unit itself is not so you’ll need to wrap it in a Ziploc or something. It’s also relatively inexpensive (lowest I’ve seen so far is P950). 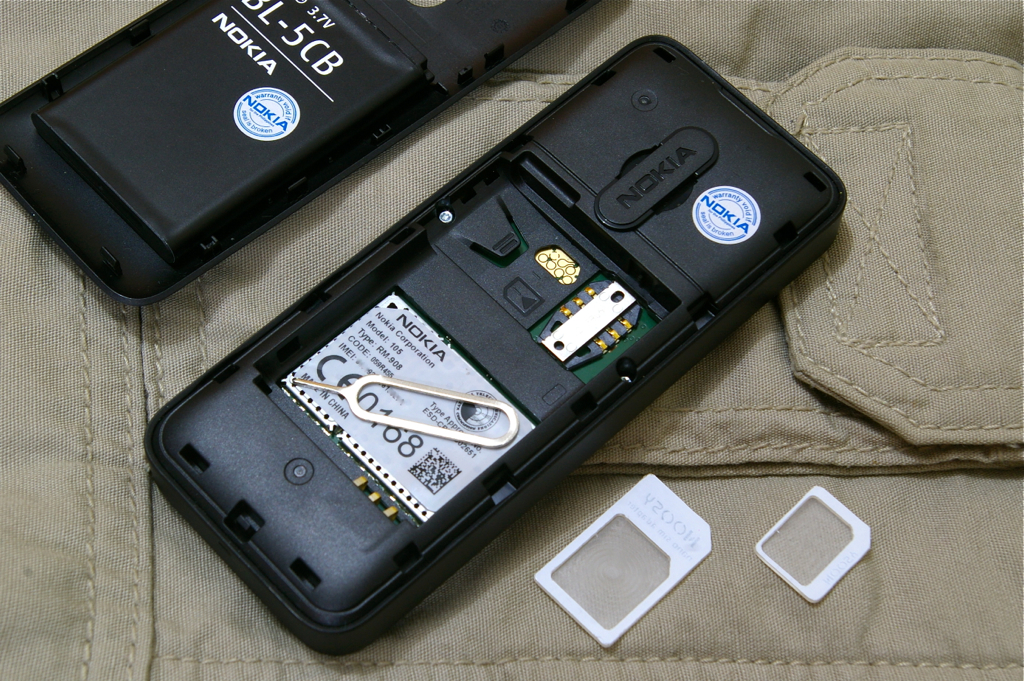 To complete my backup phone kit, I also got a nano SIM to micro SIM to SIM adapter as well as an iPhone SIM extractor tool. And they all store inside the phone. Nifty!

Of course, don’t forget to keep a copy of important numbers either on the SIM or on the phone itself.

So Microsoft has acquired Nokia. There are even talks of Elop being chairman once Ballmer bows out. The case has come full circle: Elop has gone from Microsoft to Nokia to Microsoft. And bringing along Nokia to boot.

Now Microsoft will find itself in the same position as Google when the latter acquired Motorola. Now that Microsoft will own Nokia, will it be giving preferential treatment? Even more than their previous “special” relationship? Will it be able to avoid doing that? This is probably something all of Microsoft’s Windows Phone partners are thinking. But then, how many are there? So maybe that doesn’t really matter.

Unfortunately, Microsoft has a rather poor performance with hardware. Yes there’s the XBox and… XBox. And there are dismal failures like the MSX, Tablet PC, Zune, Kin, Slate, Surface… Will Elop and Nokia be bringing in something new? But then their track record for the past 3 years wasn’t great either.

Maybe they were just sticking to a scripted plan. Microsoft. Nokia. Microsoft.

So much for synergy. A few days ago, Microsoft announced WP8 to much self-generated fanfare and a bitter fact: You can’t upgrade older devices to WP7. Used to be that’s not so much of a problem. But iOS has shifted the customer expectation towards upgradeability being a necessity. The result: a lot of disappointment and a big drop in stock price for Nokia. For sure other WP7 device makers were also affected. And for sure they already have WP8 devices on the works. But Nokia had touted “special advantages” when it decided to partner with Microsoft. Don’t you just hate it when your strategic partner doesn’t strategize with you? Couldn’t Microsoft have handled it a little bit better? When Android 4 Ice Cream Sandwich was announced, not all devices were expected to be able to run it. And even now adoption has been low. And yet that affair seemed better handled.

Michelle has been reading a PDF version of A Game of Thrones on her Nokia 5800. I had been reading the same PDF on my iPhone before I got an ePub version and knew was a chore reading. So I searched for an ePub reader for her phone. A quick search got led me to Wijnands’ blog and to the Dorian reader. It requires Qt which is pretty big but it works great!

I read the GSMArena review of the upcoming Nokia N9 and I was quite impressed. The hardware, as with the Nokia N8, is quite good. The software, MeeGo, seems to be as good, if not at par, with iOS and Android. And with Alien Dalvik, it can actually run Android apps via emulation. Yet, the N9 will be coming out under planned obsolescence: it was confirmed to be the final MeeGo phone as Nokia’s dark union with Microsoft bears fruit to the N9’s lesser twin. Nokia already knew what MeeGo was and what MeeGo will be when they decided to go to bed with Microsoft. MeeGo was even then better than WP7. And yet they pushed on. What’s up with that?