Have you ever noticed that your gadgets don’t fail within the warranty period. And that a day (or thereabouts) after the warranty expires, problems start popping up? I’m pretty sure it’s not random. There’s just too many smart people in tech.  It’s definitely by design.

There’s this thing called Mean Time Before Failure (MTBF) and manufacturers definitely would want the MTBF to be after the warranty period. Or conversely, the warranty only as long as the MTBF safely permits.

The past few days, I’ve been noticing my Sony PlayStation 3 (PS3) Slim booting, beeping three times, then shutting down. Leslie said it’s an overheating problem. I couldn’t believe it since I practically only use the PS3 for watching videos. It’s just a glorified media player so to speak. And I can usually start it up with a bit of trying.

But last week, I bought a copy of the brand-spankin’-new Assassin’s Creed III (AC3). As soon as I got home I excitedly popped the disk into the drive and started playing. I wasn’t playing for long when the PS3 suddenly shut down. This is serious: It’s affecting my gaming!

So I went and visited some computer shops and inquired how my PS3 can be fixed. I had two options: re-flow and re-ball. Re-flow is where they heat up the solder on the chips and reflow them. Apparently, the PS3 uses lead-free solder which has this tendency to crack after some thermal stress. The other option is to re-ball which is where they replace the lead-free solder with a lead solder.

Both options are rather expensive at a few thousands. And they’re not guaranteed to last long. The best warranty they can provide is three months. And you are supposed to play for only an hour or two per session. Then you have to cool down the PS3. How medieval is that?!?

Dismayed, I decided to just let the PS3 die with dignity. I just ignored the booting and rebooting problems and doggedly kept playing. Unfortunately, without even getting through 3% of AC3, the PS3 was bust. No lights, no beeps, no nothing. It’s dead, Jim.

Which bring me back to planned obsolescence. Just a month or so back, Sony released the PS3 Ultra Slim. Or PS3 Slimmer. Coincidence? I’m pretty sure it’s not. Will I be getting it? I’m pretty sure I won’t.

If you play Diablo III, you will truly find this Amazon product review of Diablo III (by Diablo himself) absolutely hilarious… and sadly so true.

I was finally able to play Diablo III for an hour or two. So far I’m not very impressed. To begin with, it is not complete. Blizzard is known for launching games “when it’s done”. This time around, they launched without Player-vs-Player (PvP). A small, probably minor part, but still a part. One can only wonder what else is not complete.

Possibly the downloader. It was buggy! Or at least the Mac version. Every time the network connection is interrupted, it exits without a warning and doesn’t even retry. Given the slow network speeds here, I would leave it downloading before I sleep. Then when I wake up expecting it to be done, I see that it has exited after downloading just a gigabyte or two. It took me several days! And guess what’s next? A painfully slow installation process. But hey, let’s just say it’s my machine and network.

After the installation, I played with the Demon Hunter. The witch doctor just looks absolutely primitive while the others are about the same as in the previous Diablo games. I chose the female version. Guess what? It’s Bayonetta, high stiletto heels and all! What’s up with that?!? I can just imagine those stilettos sinking into the medieval sod. And are high heels ever comfortable? Who needs monsters killing you when your shoes are doing it for you?

Then there’s the gameplay. There is no more stat or skill point allocation. Skills are “unlocked” at certain level. Stats are auto-assigned. Where’s the character building aspect of that? It’s like a vastly simplified gameplay version of Diablo II. It’s almost like it’s designed for console play. Indeed maybe that’s what Blizzard has in mind. Too bad RPG fans had to suffer. I still hope it will be fun and compelling so I’m giving it an honest go. Besides, I already paid for it.

After years and years of wait, 12 years to be precise, listening to Blizzard telling us it will be released when it’s done, Diablo III finally has a launch date: May 15. Until then you can pre-purchase and rest assured that digital copies won’t run out on you :P 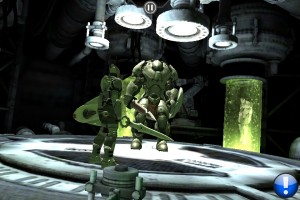 I was finally able to get all the Mech Zero equipment. I got the overly-expensive X-SC2 Sword last but with it’s Drain hits, it was a relative breeze dispatching Ealoseum, Zero Mech, and the ancestor. I hope they release another content pack soon because there’s really no point going through New Game++.