Who would have thought that you can make an espionage thriller from an environmentalism theme? I guess you can and this movie pull it off nicely. It’s like Erin Brockovich fictionalized and on steroids. Brit Marling (Arbitrage) was great as Sarah a conflicted private intelligence operative who is infiltrating a shadowy environmentalist anarchist group called “The East”. Her role is well supported by actor Alexander Skarsgård (True Blood) who was equally as good as Benji, the charismatic leader of the group. As Sarah stays longer with the group, she gradually sympathizes and eventually switches sides. But as she doesn’t agree with Benji’s methods she decided to strike out on her own. There’s not much, if any, gunplay or chases but the suspense and the drama is very much there. Well done!

A small-town hunter accidentally shoots and kills a woman while hunting in the woods. He also finds a big stash of cash in what appeared to be her camp. Soon after, the woman’s companions, who turn out to be hardened criminals, come around the town looking for her. Somehow it reminded me of No Country For Old Men. But that’s where the similarity ends. A Single Shot is the simpler, easier to watch movie. And yet it delivers fleshed-out genuine characters and a believable story. 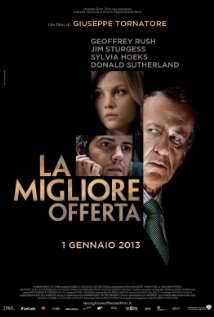 La Migliore Offerta (original title) by Italian director Giuseppe Tornatore, is an interesting film to say the least and I definitely wouldn’t want to spoil it for anyone. Set against the streets, cafes, and auction houses of charming-as-always Europe, Geoffrey Rush is an eccentric art auctioneer Virgil Oldman. By eccentric, it means I’m saying he’s rich and not poor. If he were, then he would be a loon :P

Virgil has a nifty sideline going on where he assesses and undervalues works of arts that he covets, and have his conspirator bid for it. He also filches bits and pieces of stuff from his clients. So he is arrogant, prickly, and terribly dishonest. Yet he’s charming and somehow likeable. Maybe it’s those delicious lines he delivers.

One day, Virgil is contacted by a wealthy heiress named Claire who seeks to auction off and dispose of her recently deceased parent’s stuff. Claire suffers from some phobia where she not only doesn’t want to go in the open, but doesn’t want to be with people at all. Thus, they conducted business through a wall. At first, the two didn’t get well along but eventually they got along and into a more than just professional relationship (hint: involves activities with less and less clothes on).

The cynic, like myself, would think that a young woman being interested in an old man like Virgil would be all about the money. And yet, Virgil, maybe because of his inexperience with women, actually believes her. Personally, it was already stretching it when Claire started showing that hint of an interest in Virgil. But hey, maybe it’s her eccentricity, yeah?

It is a good film to watch. Better than good if you are less cynical. 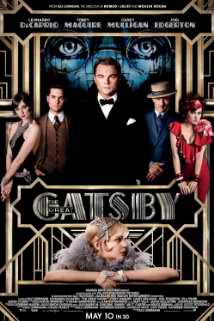 I first encountered Baz Luhrmann a long time ago with Moulin Rouge. Back then I was fascinated by his dazzling visual style. I also remembered feeling like I actually knew, actually understood what love is. Love felt so real so palpable as if I could feel it, touch it. But that’s another movie.

The Great Gatsby is about Nick Carraway, a recent migrant to New York, drawn by the opportunities of the Big Apple and planning to find his fortune as a bond trader in Wall Street. His rich neighbour is a mysterious figure who throws lavish parties in his villa.

Nick is invited into one of these parties where he finally meets his neighbour, a man named Jay Gatsby. It turned out that Jay wanted to meet Nick’s already-married cousin Daisy with whom he previously had an affair and had been running after since. Nick eventually relented. And as expected, after much planning and dreaming, Daisy turned out to be… typical. And nothing good came out of it.

While The Great Gatsby is an interesting film by itself, it’s not Moulin Rouge all over again. I was more than mildly annoyed at his hopeful romanticism. I did feel a crestfallen at all of Gatsby’s efforts to win back Daisy’s affection and felt bad at what happened to him. But not as bad as how I felt when Satine died :P 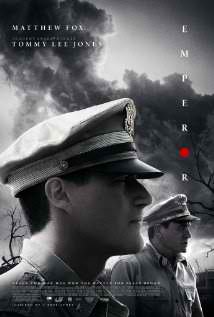 It’s a stormy day and there’s not much to do so I decided to watch Emperor. It’s about the war crimes investigation on the Emperor of Japan at the end of World War II. Which is good since I am generally interested in history. Unlike typical WW2 movies, there’s not much guts and glory action and is mainly dialogue. I thought that would be a challenge but it turned out fine and I was able to finish it :P

The key character is General Bonner Fellers, tasked with investigating the role of the Japanese Emperor Hirohito in war crimes. The other key character is General Douglas MacArthur, who just happens to be one of my childhood heroes, played as Tommy Lee Jones by Tommy Lee Jones. I couldn’t quite wrap my head around  the US marshal, being my MacArthur :P

While Fellers went around carrying on his investigation. He also engaged in a side quest searching for a Japanese woman that he met while studying in the US. The significance of this thread of the story is that because of his relationship with the Japanese woman and her family, Fellers had a good understanding of the often inscrutable Japanese culture which helped towards his final decision.

In the end, Fellers concluded that they couldn’t find any evidence that Hirohito is involved in war crimes. Likely because the fanatical devotion of officials (most of them are also going to be hanged) and their desire to protect the emperor. But the emperor has undisputedly called for an end to resistance and any further bloodshed. Hanging him would undo that. That’s what saved him.