Finally, the doctor decided to go for an emergency cesarean. Michelle’s dad took my place watching Jeanne while I went to Michelle to prepare for the birth. Unfortunately, I was nursing a cough so I decided not to go into the operating room. I’ll just have to content myself with photos. But unfortunately still, we didn’t have the DSLR with us. And my iPhone just so happened to be low on battery! So I grudgingly give the nurse Michelle’s Note 3 (ugh!) for taking photos of the birth. Oh well.

After a rather lengthy wait, the nurse came in with my daughter, Charlie (that’s shar-lee) Melisande. And again, since I had a cough, I couldn’t hold her in my arms. Still, I’m one happy puppy, or rather, dad!

After Sunday mass and lunch, Michelle went off for a massage and a facial. That left Jeanne and I with at least two hours together. No biggie, I’ve done it before.

First we went to Gymboree where Jeanne had a great time playing alongside the kids. All the other kids were doing the same. I guess the typical visitor still haven’t learned how to play with others. Still it was lots of fun for her even if the interaction with other kids is limited to things like “That’s my ball!”, “I’m still playing with it!”, and “No! No!”. Most of the time, I just let Jeanne romp. Only later did I find out that they recommend you to be a “hug distance”.

Finally, we dropped by the Spa. But Michelle wasn’t done yet. So we strolled around some more inside and just outside The Spa. After a while, Jeanne was getting bored so I took her to Dimensione which I like visiting and which Jeanne seemed to also enjoy. But it was stressful for me with all the breakable stuff within her arms’ reach.

Finally, with Jeanne becoming cranky and sleepy, I decided to head home. After leaving a text message for Michelle, we went to the parking and then drove off. Halfway there, Jeanne was already asleep.

And here she is with them: 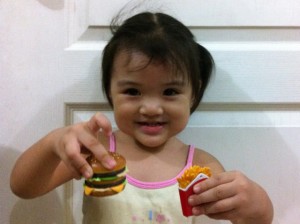