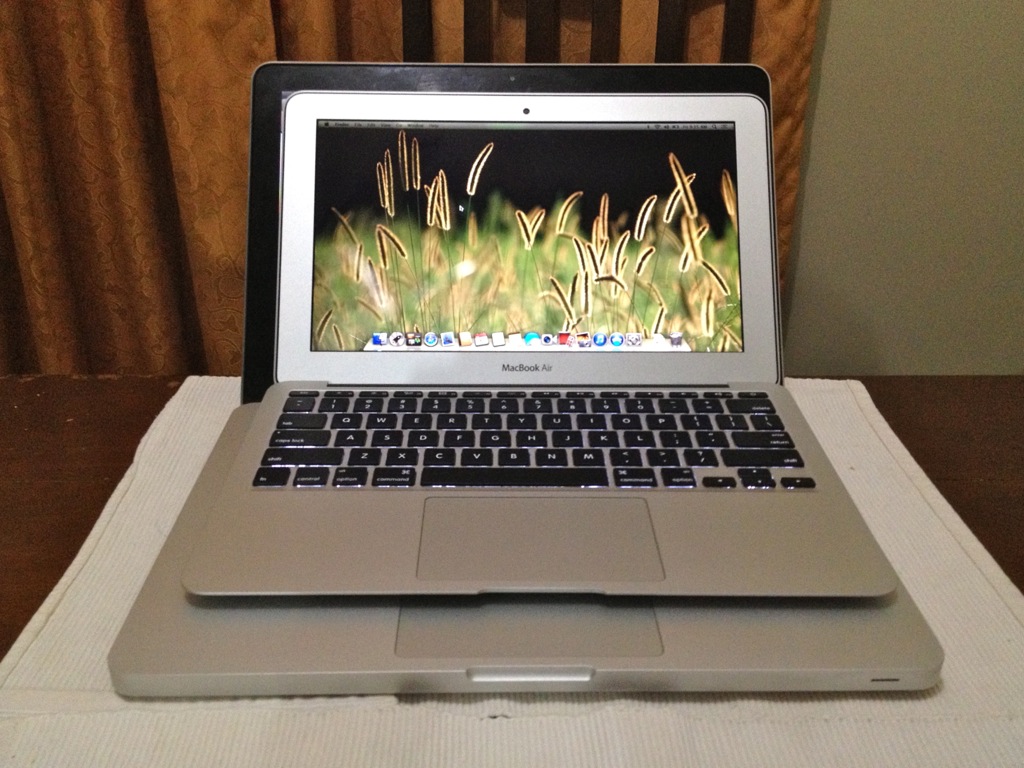 Michelle needed a computer for her research, and Jeanne iPad mini just doesn’t cut it. So we decided that I get her an early ;) Christmas present: A MacBook Air.  It’s small and light, the perfect ultraportable. As expected, build quality of the aluminum unibody is excellent. It has a 1.3GHz dual-core processor, 4GB of RAM, and 128GB of SSD storage. And most importantly for an ultraportable, it uses the Intel Haswell architecture which has been especially great in terms of battery life.

Now that’s a rather ungainly title. The dark side would be Microsoft. The side of the light would be Apple: somehow it evokes images of a supposedly utopian society, open, clean, orderly, and full of happy, contented people. But under the surface is a dark and sinister truth:  Steve Job’s and his infamous reality distortion field. Those under its spell  goes where he wants them to go and want what he wants them to want.

This is quite ironic since Apple’s famous ad “1984” portrays Apple as the liberator from a controlling entity representing supposedly IBM and, later, Microsoft. The ad is based on the novel of the same name by George Orwell. In the novel, Oceania is totalitarian state whose government  controls the speech, actions, and thoughts of its subjects. The ruler of Oceania is the dictatorial Big Brother. These days, Apple is more and more like the Oceania government and Steve Jobs Big Brother.

Still, it’s undeniable that Apple pulled off a mean feat with the iPhone. Apps is is now an everyday word and the millions and millions of users presents a very compelling argument for developing them. Of course, users buy only apps Apple wants them to buy. What is available on the App Store is tightly controlled by Apple. But hey, just develop what Apple wants you to develop!

Unfortunately, you need a Mac to develop for the iPhone. So today, I pulled the trigger on a 13-inch MacBook Pro. I chose it over the slightly less expensive MacBook because of the faster processor, bigger RAM (4GB!), and, of course, the aluminum unibody (call it higher-end-in-an-egalitarian-society look). Plus I still have the  capability to develop Android apps. I can even play games (that’s the key thing)!

And so begins my journey to the Apple dystopia and hopefully towards becoming an iPhone developer. But first, Starcraft II!

I was pretty excited when Asus launched the EEE PC 900. But when I learned that it doesn’t have the Atom processor, I decided to wait for the EEE PC 901. However, when Asus decided not to sell the Asus EEE PC 901 locally, I finally decided to just get the EEE PC 1000H.

The 1000H is a pretty good netbook by itself. But I’m a sucker for the small and cute and, to me, it’s a just a little bit on the bulky and heavy side. But I was fine with it until the 900HA came along.

The 900HA has almost everything the 1000H has 1.6GHz Atom processor, 1GB RAM, and a hard disk drive. And all this comes in a smaller, better looking package. It is almost the same size and look as the original 7-inch display EEE PCs. Notable exception would be the glossy lid and the re-laid out keyboard.

Of course you lose something in the downsizing: 9-inch display instead of 10 inches, regular sound instead of Dolby, and a smaller keyboard. It’s also got flimsy, and cheap power and touchpad buttons. So it’s not really for everyone. But for me, it sure is so I pulled the trigger on it :D

My sister, Elwyna, noted that we have five notebooks in the house. And three of them are mine. Crazy huh? Hehe.

My sister needed to install some medical courseware and it only runs under Windows so I took it as a chance to check out the recently released Windows 7 Beta. I had problems accessing the official site but after some searching here and there, I was finally able to procure a copy.

I installed the beta on my IBM Thinkpad X22 (it’s goodbye Kubuntu, for now). My Thinkpad only runs at 800MHz and has just 640MB and 40GB of RAM and hard disk, respectively. But it actually, surprisingly ran the beta reasonably well. We were able to run OpenOffice, Firefox, Quicktime, Flash, Acrobat Reader, Yahoo! Messenger, Skype, and the medical courseware with no problems at all. One or two at a time only though.

Looks like Windows 7 is going to be better than Windows Vista. Well definitely, since it seems to be just Vista with the problems fixed :P

My sister needed a computer for reviewing for her medical exams so I lent her my old (ancient?) IBM Thinkpad X22 which is running Kubuntu. She needed Skype to be able to talk to her hubby who is in the US so we downloaded and installed Skype. Well, what do you know? It actually installed and ran without a hitch. Linux definitely has come a long way. If it we’re not for my games, I would have it on my Asus EEE PC 1000H. I wonder if it’s time to check out Wine, the Linux Windows Emulator, again. Hmmm.